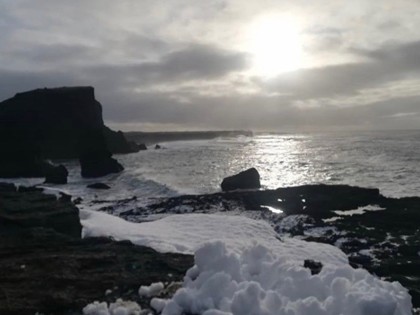 Our trip to Iceland provided us with an insight into a culture evidently different to what is known to us in England. We experienced a dramatic change in climate and we undertook various events that showed us how a change in location changes the everyday lifestyle of individuals, as well as the difference in landscapes, alien to us before the trip.

Monday was a day full of travelling, where we flew to Keflavik Airport (former US base), from Gatwick and arrived at our first hotel - Hotel Ork. We even were able to gain a viewing of the northern lights, which was a very fitting start to the trip!

Tuesday was our first full day in Iceland where we first saw the landscapes in daylight as we drove through the country past the Hekla volcano (‘Hekla’ , Icelandic for ‘hell’) and lava fields dotted with Icelandic horses as the sun rose over the snowy peaks. Our first stop, Skógafoss, was a dramatic, 60m waterfall on a rocky cliffside located in the south west of the Island. We were all layered up ready to conquer the cold weather! We could walk up steps, located on the side of the cliff, which enabled us to view the waterfall from above. The  birds eye view was rather brilliant ,as the winds blew and the icy waters trickled down the rocks. 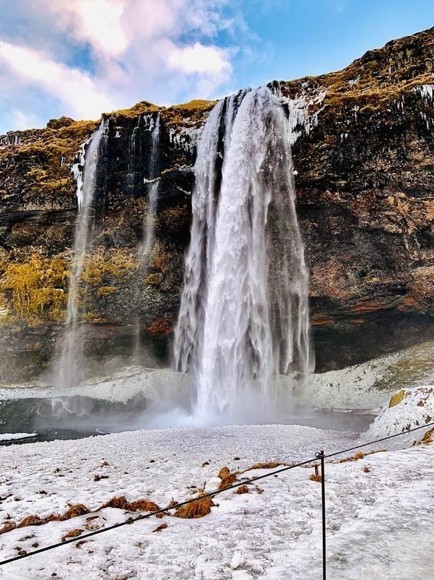 Secondly we visited Reynishverfi black sand beach, which had a range of interesting organic columns which were on the side of a cliff next to a cave (these columns were a common theme in Iceland, even in its architecture). From the beach we also could view Dyrhólaey peninsular- clouded with a thick mist during our morning explorations. The waves at the beach were intense and allowed us to feel the chilly winds of Iceland for the first time! Here, the landscape was like nothing we’d seen before, almost mystical.

Following lunch at the beach was Glacier walking at Sólheimajökull Glacier which was an incredible experience! We arrived and were given crampons and pickaxes to use when climbing the glacier. The landscape around the glacier outlet was beautiful, with the  surrounding mountains sprinkled with snow. Every so often we were able to hear the rocks tumbling down the side of the cliff giving us a surreal feeling! Our guide gave us a great explanation on the ice and especially the effects from climate change here in the last few years- almost scary how the ice had melted so quickly.  However ,it was a brilliant experience on the glaciers, as we made our way through the steep icy paths and back to the coach.

We then took a coach journey back to Hotel Ork for the second night, where we were able to go for an outside swim (  the pool powered by geothermal activity) whilst it was snowing!

Wednesday was a day where we experienced the Golden Circle tour! We started off by visiting the Hellisheidi Geothermal power station where we were given a talk regarding how the power station worked and the effects it had on the community, along with free-time to explore parts of the power station, including a viewing point into the mechanical side of the machines. We then visited the Secret Lagoon, a geothermal hot spring/pool with a range of miniature surrounding geysers and springs. We were able to swim in the soothing waters here, which were very warm, and view the beautiful landscape around us.

Then ,we travelled to Strokkur Geyser in the South West of Iceland where we learnt how the geysers were situated in geothermal areas, and how the water underground comes into contact with hot bedrock and heats up, building pressure to create the geyser. This was such an amazing experience even though it got many of us soaked at first! However, the strong scent of sulphur will not be missed...

We then visited Gullfoss waterfall where the cold really kicked in and many of us noticed the dramatic difference in climate! The tiered waterfall was located in the canyon of the Hvítá river in southwest Iceland. We went to two different viewing spots on the side of the waterfall which gave us a wonderful view over the top of Gullfoss! It was a rugged landscape with dramatic peaks and very low temperatures...

We then visited the Þingvellir National Park, located 25 miles northeast of the capital, where we were taken on a tour around the park. Here we were able to walk between two submerged rifts- Silfra and Davíðsgjá. This was another location where the cold really took us by surprise! During our walk here, we viewed the country house of the Icelandic president, as well as the historical assembly place of the Icelandic Parliament. In this area, nowhere else in the world is the drifting apart of two continental plates as clear here. It is the oldest national park in the country!

Afterwards, we drove to our new hotel in Reykjavik ( ‘Rey’ translating as ‘Smoky And ‘Vik’ translating as ‘Bay’, with the original settlers led by Ingólfur Arnason around 874)and settled down for the evening. We stayed in Hotel Cabin for the next two nights. 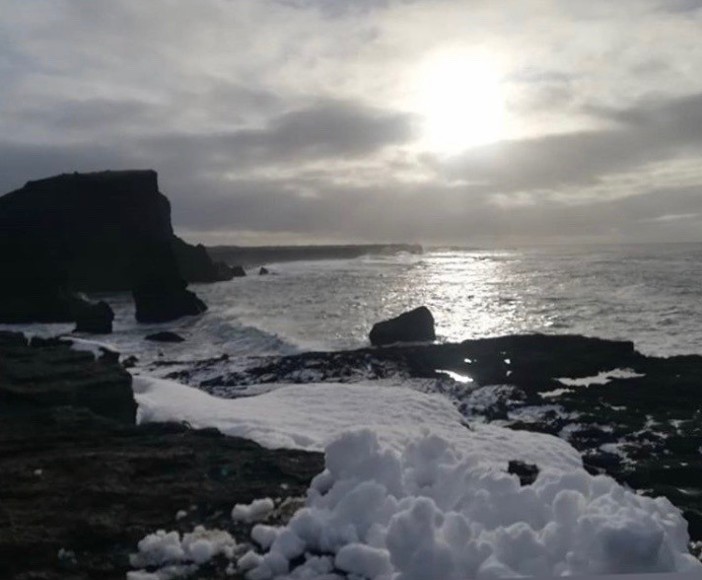 Firstly, we visited the bridge between the Eurasian and North American plate, which was surrounded by a dramatic landscape, with miles of snow covered terrain and rocky ledges. We ventured beneath the bridge which gradually turned into a snowball fight.Then we arrived at the  Hornito volcanoes, where we were able to view huge areas of igneous rock ,along with the remains of lava tunnels. We climbed the remaining entities of volcanoes and were able to gain views over the surrounding area.

After a brief stop for lunch in the fishing village of Grindavik, we visited the Gunnuhver hot spring area, where a pungent smell was evident... We were able to walk along a boardwalk entering a cloud of steam sourced from a hot spring, and then a walk around Seltún geothermal area further on. We stopped at Lake Kleifarvatn which was an outstanding body of water with an unforgettable background! For this view, we travelled further into the mountain range where there were more peaks coated with snow.The lake itself contained various fragments of ice , almost like diamonds, along with hotspots beneath the surface. The view from the coach was  also spectacular as you could see the windy roads among the majestic mountains, snow for miles (especially scenic for great photos!). 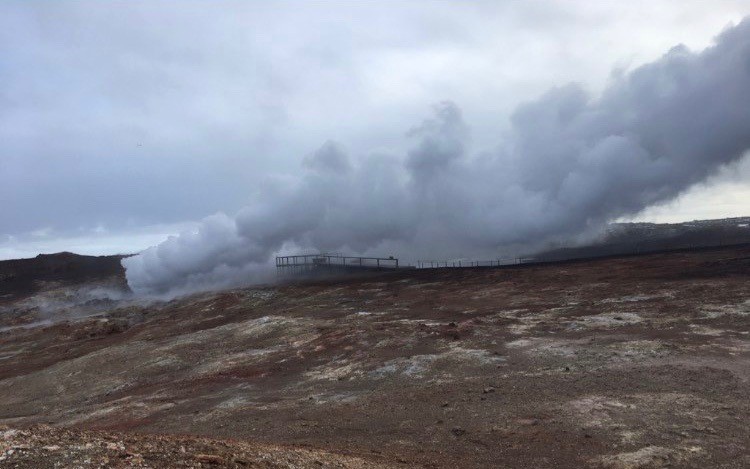 We then drove  back into the capital of Iceland- Reykjavík. Staying here provided the group more of an insight into the culture and community in Iceland as we were among Icelandic people and saw their day to day living. We had some free-time in Reykjavík,allowing us to explore the streets  and shopping areas, giving a great insight into the way they live. The time we had here enabled us to indulge ourselves in traditional aspects of the Icelandic lifestyle. We then went to the Hamburger factory in the city which was a enjoyable way to spend our last evening in Iceland! Whilst we were there we were able to experience some quirky differences , for example when a new baby was born a bell  was rung and the population number sign would change, evoking a small celebration in the restaurant.

On Friday we went back into Reykjavík and Andy (our tour guide) showed us his favourite places in the capital ( like a Viking boat statue, the Concert Hall and  the modern church of Hallgrimskirkja) and talked about the relevance they had to the area. We also got to see the cultural architecture in Iceland and identified how many patterns were repeated, linking it back to prior experiences. In the afternoon we went into the harbour where we boarded a whale watching boat. We all received tickets, displaying the types of  cetaceans we could have potentially spotted, and got ready for a three hour excursion into the choppy  Atlantic seas. There were three decks all providing different views and crew members informing us on what we could see on our trip. Unfortunately,  no dolphins or whales were spotted although a seal was sighted, and we went past the John Lennon and Yoko Ono peace tower on one of the islands. We then made our way back into the harbour and efficiently made our way on a coach to the Hotel to collect our luggage. We then shortly arrived at the airport making a quick stop, then arrived at our gate with little time to spare... We then departed the Keflavík International Airport and made our way back to London Gatwick- we had a good flight with slight turbulence towards the end. 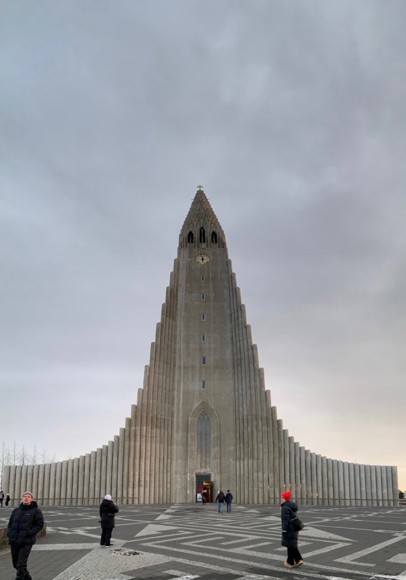 We had such an amazing trip and thank the teachers who took us and Andy for guiding us along the experience. Exploring Iceland was definitely unforgettable and a brilliant example of our GCSE geography studies in action.

*
Cookie Notice: We use cookies on this site to improve your user experience.
Accept Find out more